Does Rudy Gay Fit with the Thunder?

The rumor that Woj won’t stop bringing up: The Thunder has interest in Rudy Gay.

While Gay is a 6’8” small forward that averaged 18.7 points per game last season, does he even fit with the Thunder? Let’s take a look.

Why Rudy Gay is a good fit:

1. He’s better than the other Small Forwards/Power Forwards OKC has now. There is no question the Thunder needs an upgrade at the forward position. The team had probably the worst forward rotation in the NBA last season, with none of them having a PER above 10.7 (league average is around 15). Jerami Grant and Doug McDermott are two of the bottom three players in ESPN’s RPM. Andre Roberson is ranked 17th among Small Forwards, but we are all aware of his deficiencies on the offensive end. The numbers like Gay a lot more than the Thunder forwards (Suprise!). He ranks 14th among Small Forwards and had a PER of 17.

2. The numbers indicate he’s not as bad of a defender as people think. Some of these numbers are a little shocking, so you might want to sit down. Gay may not be a stopper, but he is not the zero many think he is.

3. He can hit from downtown. He hit a career high 37% from three last season, which would have been third best on the Thunder roster.

Why Rudy Gay is not a good fit:

1. His shot selection will not help with spacing. The chart below shows three point accuracy and volume. While Gay did shoot a good percentage from three, he didn’t shoot a lot of them. In fact, just 24% of his shots came from downtown last season, while 44% of his shots came from 10 feet and in, where he prefers to operate within the mid to low post. There will be a number of options for floor spacers out there. Wilson Chandler or PJ Tucker would be adequate, while CJ Miles would be an ideal spacer with 63% of his shots coming from three. The Thunder should also give McDermott an opportunity at it.

2. He’s more of a power forward. As stated above, he prefers to take up space in the paint or mid-post. His Achilles injury also comes into play here. While he did post an impressive workout video on Instagram, his game has slowly been moving toward more of a power forward. With a decline in athleticism that comes with age and such an injury, he should get more time at the four. That’s where fit comes into play again. The Thunder want to develop Domantas Sabonis and Grant, and if Gay is taking up 30+ minutes a night it will be tough to see what you have in both of those youngsters.

3. Role. Will Gay accept a role? If he is a starter at either forward position, will he be satisfied spotting up? He could allow Westbrook to be off-ball some, but it would be more of a  “your turn, my turn” than the motion offense that Billy Donovan wants.

The truth is, if the Thunder can’t make a major splash, Rudy Gay is not a terrible option. The ideal situation would be Gay signing for a small dollar amount within one of the exceptions, and agreeing to come off the bench. This would allow the Thunder to move on from Enes Kanter without giving up any bench scoring. Gay could also close games at the power forward position. If he gets his touches earlier in the game, he would probably be fine spotting up in closeout situations.

If Gay is expected to start and be the number two man next to Westbrook, while under a larger contract… well…. The Thunder might want to ask the Grizzlies, Raptors and Kings how that worked out. 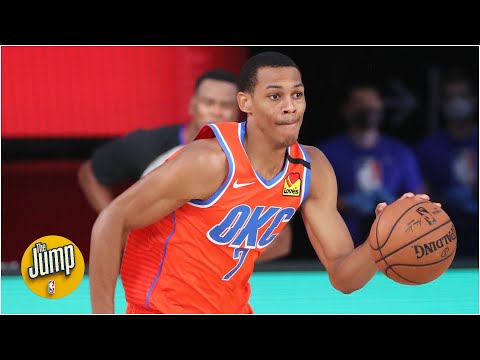