How to turn OKC into a contender today

Wednesday night was so bitter sweet.

The excitement in the Thunderdome was spilling over because you know, it was the first game ever, but the team didn’t really produce on the court. At a few points, if you looked around you could see people resting their chins on their palms likely thinking, “I wonder what Chris Paul is doing right now… (loud sigh).”

This team is young, raw, talented and young. They will get there but it’s going to take some time because, well, you know, they’re young. Did I say they’re young? But as I watched the Thunder fall behind by 24 for a third time in the third quarter, I started wondering, how could we turn this team into a contender now? What (reasonable) pieces could OKC acquire that could guarantee 45 wins? Even before a thunderous (see what I did there) fast-break dunk by Dez that ignited the crowd, I was already putting together trades in my head that I couldn’t wait to rush home and plug into the ESPN Trade Machine. (Now, I’m no Bill Simmons, the self-proclaimed Picasso of the Trade Machine, but I was determined to try.) 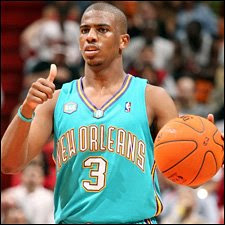 Just know: We miss you.
“Ok, how about Earl Watson, John Lucas III and cash for Kobe and Andrew Bynum? No? Ok, Robert Swift straight up for Al Jefferson. Denied? But Robert’s upside! His upside!”
So I was a little overzealous with my trades. And the thing about the Trade Machine – as awesome as it is, it will basically accept any trade you propose as long as the money lines up. It doesn’t really have a “common sense” factor. Chris Wilcox’s expiring contract, Earl Watson and cash for Carlos Boozer? Yes please.

So moderating the fairness was difficult. You give me an hour on the Trade Machine and my starting five would be Chris Paul, Kevin Durant, Kobe, Carlos Boozer and Andrew Bynum. My bench would then have to consist of Keith Van Horn, a janitor and Matt Pinto, but you get the point about the Machine.

Anyway, I started plugging in stuff. I made a list of the team needs in “most needed” order. One was “big man to control the paint.” Two was “deadly outside shooter.” And three was “consistent complement to Kevin Durant.” I truly believe the Thunder could win with a lineup like this:

And then a lights-out shooter off the bench. So who should we go after? The thing is the Thunder doesn’t have a lot of enticing pieces outside of the “off-limits” guys. The very tradeable guys are Joe Smith, Chris Wilcox, Earl Watson, Desmond Mason, Damien Wilkins, Mo Sene, Kyle Weaver and D.J. White. Not exactly a group that an opposing GM would skip lunch to swing a deal for. But regardless, that’s who we were working with.

I set my sights on a good scorer to play the three. I needed to find a team that could use a decent point guard (Earl Watson) or a solid four (Chris Wilcox). I locked on to Indiana’s Danny Granger. He’s a good three-point threat (39 percent career and 40 percent last year) and averaged a solid 19.6 last season. He’s got excellent size (6’8″) and a good defender and best of all, he’s got an expiring contract. The Pacers probably aren’t going to contend this year, so they would likely be enticed by draft picks and expiring contracts themselves. So you send Chris Wilcox’s expiring contract and next year’s first round pick and get Danny Granger and Jarrett Jack in return (Jack is a throw-in to line the money up). Both Granger and Jack’s contracts are up after this season and Indiana would probably go for unloading both to free up cap space. Plus, they could really use a body like Chris Wilcox on the blocks and it might give them a chance to groom Brandon Rush into a primo scorer. And honestly, I feel like Granger could kill two birds with one stone by giving OKC a consistent scorer and an outside threat.

Now I don’t know enough about this and Granger may be an untouchable for the Pacers, but we 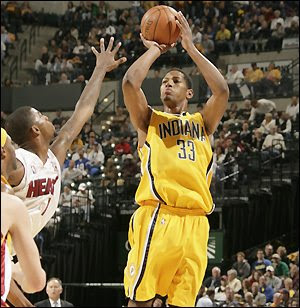 can dream, right? Especially since Granger dropped 33 in the season opener, they might not take Kevin Durant and gold bullion for him. Oh well.

On to finding a good big man. With Wilcox gone, the best leverage to use is either draft picks or Joe Smith and Earl Watson. Here the Thunder needs to set their eyes on a well-tested big that they don’t have to keep if they don’t want to. The victim? Brad Miller. He’s got a huge contract ($11 million plus) and the Kings would likely love to dump that. (Right now Miller is suspended five games for violating the league substance abuse policy). Miller has two years on his contract, so if the Kings could get rid of it for some expiring ones, they’d likely bite.

The Kings have a lot of needs so depending on what they’d bite on, you offer up any two-piece combination of Earl Watson, Joe Smith or Desmond Mason. More than likely, the Kings don’t want Watson because he’s signed through 2010. So a trade of Mason and Smith for Miller might work. Both Mason and Smith’s deals are up this year and the money lines up. Smith could fill the void of Miller for the season and Mason could either start in place of John Salmons or provide a nice back up. It’s win-win for both teams.

I think the Thunder could win 45 games with that lineup, don’t you? Plus you’ve still got expiring deals with Granger and Miller in 2010, to which you could use Miller as trade leverage next season. Jarrett Jack or Watson could (and should) be traded to try and replenish Sam Presti’s cupboard of draft picks. The bench just got lighter without Joe Smith or Dez, but you’ve got Jeff Green to play behind Granger and Johan Petro/Robert Swift/Mo Sene to fill the blocks.

Now, this will never, ever, happen because 1) The Pacers probably don’t want to part with Danny Granger and 2) Presti doesn’t really want to contend right now. It’s not the plan. The plan is to draft wisely and sign a few good free agents. Which makes sense because the Thunder only has $20 million in committed salary for next season. So there’s a lot of green to play with. Throw money at Carlos Boozer or Chris Bosh, draft Blake Griffin or Ricky Rubio… things are going to be alright in OKC.

But if we didn’t want to slump in our chairs and dream of CP3 all season, this is what we do. Or maybe we just pray KD turns into a megastar, Jeff Green plays to potential, Chris Wilcox has a career year, Russell Westbrook develops faster than thought and Damien Wilkins shoots threes like he’s lost his mind. It could happen. I guess. Until then… you think Chris Paul is maybe eating dinner now or breaking down game film?