There will be no Thunder players at the All-Star festivities, and no fans in attendance for the rest of OKC’s home games

I love these NBA.com hotspots. I could shuffle through them all day and look at where guys hit shots from. As you look at them, you notice strange trends. For instance, Kevin Durant: 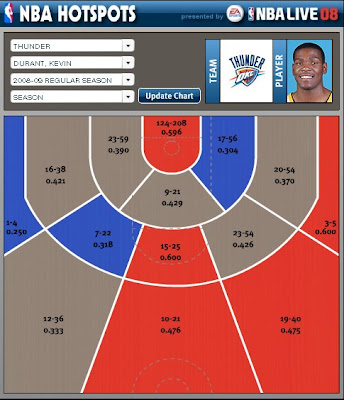 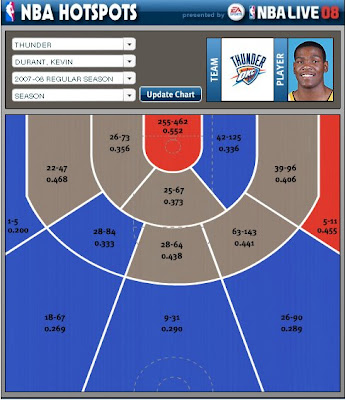 But here’s what started to catch my eye more than anything from both seasons. He also doesn’t shoot well from the baselines about 6-8 feet out (34.7 percent this year). I’ve always said that’s the hardest shot in basketball. It’s too far to be an easy lay-in and it’s too close to be a pull-up jay. You’ve got no backboard — it’s basically swish or miss. I probably airballed that shot 30 percent of the time in my prestigious basketball career. LeBron James is shooting 24.4 percent from the baseline tweener as I like to call it. (Because you don’t know whether to take a full jumpshot or if you should float it or if you should drop step toward the rim and try and lay it. Just a tough shot.) Kobe is hitting 38 percent on the tweener (10 percent below his season percentage). One of the best shooters in the league, Joe Johnson, is hitting 38 percent on the tweener (six below his season percentage). I don’t think this is big news to anyone, because most everybody knows players hit a higher percentage the more they are in front on the rim. Instead of looking at just a little thin rim, you’ve got everything to focus on — the backboard, the hoop, the square, etc. But that tweener shot is closer than the jumper five feet behind it, yet for the most part, players hit that jumpshot more than the tweener. Swish that around for a minute and take it for what it’s worth.

Also with LeBron, just because it’s crazy — he’s shooting a wonderful 50.8 percent on the season. Good, right? Well, look at his hotspots: 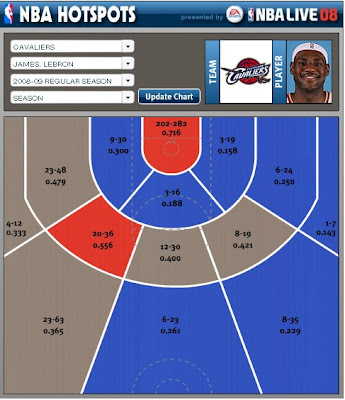 Unless he’s at the rim, he’s not a good shooter. At the rim, sure — he’s hitting 71.6 percent (compare that to KD’s 59.6 — Bron knows how to finish). But anything else, he’s hitting just 34.8 percent. Wow. It’s not like this is any major revelation here because we all know LeBron’s game is getting to the rim, but when you really look at it, it’s kind of amazing. It’s very interesting to see the difference in two of the top six or seven scorers in the league and how they get their points. Durant hits silky jumpers. Bron finishes at the rim. Nothing revolutionary there, but again, I was just struck by that when it was laid out so plain and clear with the hotspots.

Sunday Crossword: AS Is

There will be no Thunder players at the All-Star festivities, and no fans in attendance for the rest of OKC’s home games