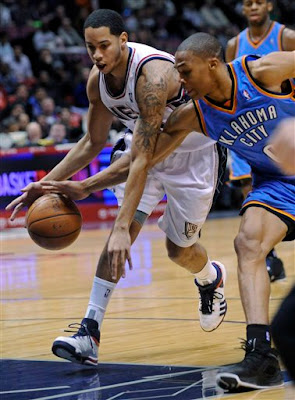 In the Thunder’s second straight overtime game on the road, Oklahoma City came up short. In OT tonight, the difference was a slow start. The Nets jumped out 7-0 in the extra period while the Thunder missed two shots and turned it over twice before scoring. It all ended up leading to a 103-99 loss to New Jersey.

But they did show some solid resiliency getting back to within two, but the team was gassed. Jeff Green and Kevin Durant both went 48 tonight. Nenad Krstic played a season-high 23. Russell Westbrook played 37 and Earl Watson 38. It was a long, hard-fought night for OKC.

Two things stick out as reasons OKC lost — turnovers and rebounding. The Nets piled up 18 offensive boards on the Thunder and OKC turned it over 22 times. That’s a total of 40 extra, free possessions New Jersey got tonight. Plus the Nets scored 26 points off the 22 turns. That’s bad.

If I were to second guess anything tonight, it has to be the final play of regulation. I understand what Scott Brooks is trying to do there. You’ve got Russell Westbrook who is an elite leaper and the Nets have their seven-footer, Brook Lopez, pulled out of the lane guarding the inbounds pass. So OKC tried to go up top to RW for a tip-in to win. But there was 0.5 seconds left in the game which is enough for a catch and shoot. And Kevin Durant is maybe the toughest man in the world to guard on a catch and shoot. He’s so long that he can get his shot over basically anyone. I’d rather see KD hoist a 29-footer than an oop attempt at the buzzer. That sort of oop is like the equivalent of a Hail Mary in football — high risk, high reward. Oh well. If it goes in then I don’t make a peep.

Since it seems I have to spend at least one paragraph per recap heaping praise upon Russell Westbrook, let me just say this about RW — I’ve been saying he’s got that little jumper coming along nicely, but now he’s expanding on it. Tonight, he used a great baseline dribble-drive, floated out toward the three-point line, took one hard faux step in and bounced back for a sweet 15-footer. That’s the move that can make him absolutely lethal. He’s so freaking lightning quick that every opposing guard is doing to fear his drive. But now with a fake push and a step-back jay, he’s deadly. It opens up his drive even more and he could see more points, more assists and more everything from that. Oh, and he only turned it over two times in 37 minutes, scored 17 and dished four assists.

And Earl Watson has played very well the last two. I’ve been very frustrated over the first two and half months with his play, but he’s been extremely productive the last few. And evidently, it’s because he’s healthy. He had 11 and nine assists and does an excellent job throwing opposing teams a changeup when he steps on the floor. Westbrook creates, Watson distributes. It works pretty well.

One thing about the Nets: Brook Lopez is going to be a very solid big man in this league. He’s got freakishly sweet hands, his footwork is great and he’s seven-feet tall. He torched OKC scoring 31 and grabbing 13 rebounds — five of them being offensive. Nick Collison did all he could to hang with the bigger Lopez and Krispy has never been known as a great defender and plus he’s rusty. It was a perfect recipe for a career night for Lopez.

But I have to give it up to the Thunder for showing up tonight on the road and taking a .500 team to overtime. And on top of that, OKC got the TWO stops it had to have at the end of regulation. And on top of that, the big 11-3 run to tie the game at 88-88 to even give the Thunder a chance. Those a more baby steps in the thousand mile march to respectability. But look at it this way — since Dec. 31, OKC is 3-4 with two two-point losses and one overtime loss. I know it’s easy to coulda, shoulda, but geez, the Thunder’s just 11 measely points away from away from being 6-1 in that stretch.

One quick travel day back home and OKC gets ready to take on the Jazz Wednesday night at the Ford Center. I don’t know — I feel a big home win coming. Just like Marc Stein said in today’s power rankings, it’s strange to feel this much optimism for a 6-33 team, but it’s there. 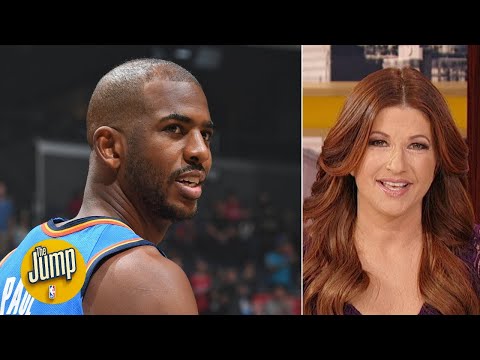