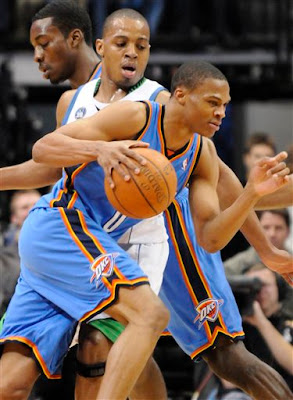 Ever stay up waaaay too late on a Tuesday night, just sitting there on the couch mindlessly flipping channels, catching a cool episode of I Shouldn’t Be Alive and then watching the same SportsCenter like four times? Then you wake up the next morning and you’re a zombie until quitting time and all you can think about is, “Why in the heck didn’t I go to bed at a reasonable time? I should have known I had business to take care of tomorrow.” That was the Thunder tonight. Instead of finishing off the Knicks last night and cruising into tonight’s game, they stayed up way later than they should have and they paid for it tonight.

It was evident from the tip, the Thunder left their legs in Oklahoma City. Jumpshots were short. They were slow on the defensive end. Loose balls went to Minnesota every time. Perimeter defense was atrocious. I swear I saw a couple guys yawn while the ball was in play. Just bad all the way around. And you know what I have to say about it? It happens. Especially when you’re not all that good and you’re average age is 24. It’s just bound to happen.