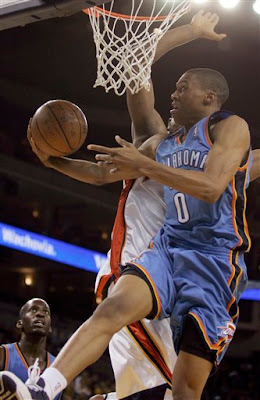 Is there reason to be concerned? The Thunder (0-3) lost 122-102 to Golden State (2-1) tonight, which really wasn’t a big surprise. We all knew the Thunder wasn’t going to be good, but with Kevin Durant taking it on the chin again with a 4-16 night from the floor, is there reason to wonder about the season? The team is 0-3 and hasn’t really played all that well. Should we worry?

But I’ll tell you one thing to maybe worry about – Jeff Green’s ankle sprain. The guy was coming on. He played well against Sacramento and was looking good for a half against the Warriors. But hopefully it was just a light tweak and he was held out for precautionary reasons.

Other than that, there’s really nothing to be worried about. The team wasn’t playing with a loaded gun, seeing as Nick Collison was held out and a bunch of other contributers didn’t see any time on the hardwood either. The squad is playing a stream of games in just a few days so they’re pacing themselves. And the point of preseason is to get better, get more acquanited with your teammates and freshen up your game. Hard to say if that’s really happening right now, but again, it’s preseason ball and there’s still four more to come.

Negatives:
Defense. But in reality, Golden State is very good offensively. So in most cases, in order to beat them, you have to outscore them.

Jeff Green’s injury. Probably not too serious, but with the growing laundry list, it’s not good to have another guy out. With the rate these guys are going down, by the end of this preseason schedule, Matt Pinto may be suiting up.

Fourth quarter. The team hasn’t closed well at all. Tonight they went 4-17 in the fourth and overall, have been outscored 81-56 in the money period. That’s not good. Definitely the youth showing through.

Positives:
Damien Wilkins. In double-digits every night so far this preseason as he had 23 points tonight, including 3-6 from downtown. Good stuff. The Thunder is looking for another scorer like a six-year-old is looking for Waldo and Wilkins may be that answer.

The team looked much crisper and the offense showed serious life. They scored over 100 for the first time and at times looked very crisp offensively. Russell Westbrook once again impressed and John Lucas had a nice game. The team is young, but tonight it showed improvement.

Next up:
In Tulsa against the Rockets Monday night.

Box Score
And your view from the other side (even though they refuse to acknowledge our presence).