Shai Gilgeous-Alexander ended his rookie season with the Clippers as a second team All Rookie who was drafted 11th by a rebuilding Clippers team and had what many considered a surprising year. In July of 2019, however, his outlook suddenly looked a lot different when he was traded (along with Danilo Gallinari and draft compensation) to the Thunder for Paul George. No longer was he just the young up-and-comer. He was now the guy that got traded for a star. Fair or not, his expectations were increased and coming into the 2019-20 season, and a lot of eyes were trained on SGA in Oklahoma City to see how he fared.

There was hope that by season’s end (maybe?), he could show glimpses of going from “promising young player” to “legitimate impact player” on an NBA level and be one of the most improved young guards in the league. Shai would have to show major growth to do so, as even good rookies are often not terribly positive players. With stiff competition from the likes of Brandon Ingram, Devonte’ Graham, Jayson Tatum and others materializing early in the 2019-20 campaign, improving most was a high yet attainable goal for Gilgeous-Alexander.

Shai’s statistical improvements began in some of the most basic and traditional ways, as he increased both his scoring efficiency and usage out of the gate. Rising to nearly 24% in usage rate on significantly higher shooting volume and increased efficiency was a quick indication that he was ready and able to provide more value offensively. But the improvements didn’t stop with volume.

He may have gotten some unfriendly rookie whistles in LA (we all remember Domantas Sabonis’s infamous inability get any calls in his first season), but SGA’s increased free throw attempt rate and scoring output from floater range both contributed to a better scoring season. In roughly the same amount of minutes played as his rookie season, he drew an extra 45 shooting fouls and was blocked 8 fewer times.

And while his 3-point percentage dipped slightly, his rate of assisted threes went from over 90% his rookie year (basically a spot up shooter) to 56.4% this season. He’s creating a lot more of his own looks; making self-generated threes is a much more difficult thing to do. And as Aidan Elrod has noted, he’s added a nice little stepback three that was basically non-existent in his time with the Clippers.

All of these trends are positive signs for SGA’s future development in the scoring department, and put him pretty squarely in line with others in the Most Improved Player race.

To add to the basic scoring numbers, Shai’s advanced stats have made a bit of a leap as well. He’s gone from a significant negative to a clear positive in BBall Index’s Player Impact Plus-Minus, improving more than all but six players:

He’s also shown improvement in advanced plus/minus trackers like real (RPM) and regularized adjusted (RAPM) plus-minus (though his luck-adjusted numbers are still slightly negative due to some shooting luck he’s enjoyed on the defensive side of the ball). He also shows out better than both Ingram and Graham in two of these three metrics. Granted, these numbers aren’t intended to definitively rank players or capture their true worth, but they do measure how well a player is performing in his role. SGA’s ability to play within his expanded role on the Thunder has been objectively positive. His skillset has grown in on-and-off ball offense, and he’s been a reasonably disruptive perimeter defender at times.

Shai’s growth has been comparable to many others in the running for Most Improved. His box score advanced stats1from Basketball Reference have shown similar growth to other consensus candidates:

He’s made leaps in most metrics across the board. Gilgeous-Alexander’s growth is on par with players like Devonte’ Graham, Brandon Ingram, and compares to Bam Adebayo in pure year-over-year improvement. He might not have proven he’s a franchise level talent quite on par with Doncic, Tatum, or even Adebayo, but SGA has made the jump from prospect to bonafide second banana for a good team. It would be very surprising if he didn’t see some votes in the MIP race.

And while being in the running for an award is nice, Shai’s development brightening the Thunder’s future is nicer. 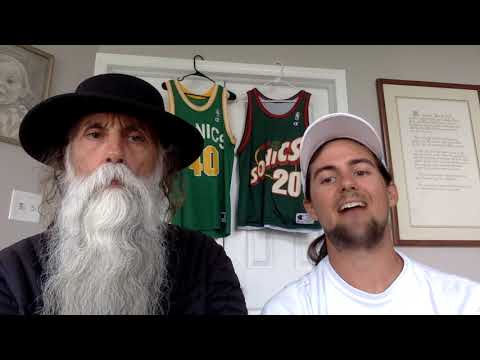