It sucks, but not that bad.

Regardless of the name I have a favorite team. When a team is yours, they your favorite no matter what they are called by. It’s unfortunate that ownership went with such a cheap, corny name, but hey, at least a ball will bounce in the Ford Center this fall. They could have called them the Oklahoma City Cuddlestorm or even worse, the Oklahoma City Energy and I’d still be calling the box office getting my Loud City seats.

Let’s face it though – it’s a WNBA name. It’s true. I know it. You know it. The Sky, the Storm, the Fire. The OKC Thunder vs. the Atlanta Dream… TONIGHT! But that doesn’t mean I won’t support them. It’s just a name. It doesn’t count toward wins or losses. Maybe it makes for an easy target during a drunken bar argument, but as far as I know, nobody has walked out onto the court and before tip-off the ref said, “OK, Portland wins because honestly, that logo really sucks.”

The point is, the name is new. It stinks because it’s new. I remember a few years ago when Charlotte called itself the Bobcats, everyone hated it. That’s the way it goes. The colors, the logo, the name all suck because it’s new and different. In 10 years it will be as household as the Orlando Magic and we’ll forget all about it. Toronto Raptors. Toronto… RAPTORS. Worst. Name. Ever. But you know what, it works now. Because it’s just become a household name. We’re used to hearing it, we’re used to reading it, we’re used to seeing it. And in time, the same thing will happen to “Thunder”.

The logo has some issues though. First off, why is Thunder above OKC? Are we the Thunder Oklahoma City? It isn’t grammatically correct. Secondly, I wish there was something “Oklahoman” in the logo. Instead of the shield, why not put the outline of our great state? Maybe something pulled from the state flag? A peacepipe, an eagle feather or even olive branch. Just something to identify it with Oklahoma.

But one thing I’d recommend for all fans is to put the Thunder logo next to other NBA logos. It might make you feel better. For instance:

What is it? Anything? A basketball that is moving with a name through it? 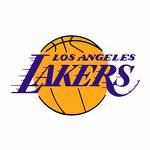 Strikingly similar to the one above. Same font, same idea… but yet, somehow this is considered classic. Know why? Because it’s stood the test of time. And “Laker” doesn’t even have anything to do with Los Angeles. It was just brought over from Minneapolis in the Lakers’ move. You know why they work? Because the Lakers’ logo is from 1960 and the Clippers from 1978. We’re used to them.

Management chose to go with a neutral logo that could *fingers crossed* become a classic one day. They didn’t bust out some corny logo a la the Washington Wizards or Golden State Warriors. Those two stink. Besides, what do you do with something that isn’t tangible like Thunder? Wrap “Thunder” around an image of God bowling? I do hope the mascot is buffalo related though because that will at least tie it back to Oklahoma. I don’t know if Clay Bennett knows this but tornado does not equal thunder. Thunder happens everywhere, not just the Oklahoma. I get the severe weather idea, but I kind of hope the play up the thundering bison herd thing in a way.

The point is, get over the name and appreciate the team for what it is. If you live in the Sooner State, it’s your top squad. I’d have called them something different but oh well. I’d have chosen black and yellow for Thunder because when I hear Thunder (the name, not the actual thing) I think nighttime (dark/black) and lightning (yellow). But that’s me. Check out other names and logos and really think about them. The Nets’ logo is bland. The Heat logo isn’t real creative. The Bobcats’ logo just plain stinks. Besides, with most expansion/new teams, the logo changes in a few years anyway. So maybe it won’t matter at all.

The key to making it work is:

1. Good uniforms. They need a solid, simple design that can be considered classic from the get-go. You know you’ve got a good uni when 20 years from now it’s throwback night and you’re still wearing the same duds you had on 20 years ago. One major thing: they need to read Oklahoma City on the front and not Thunder, at least on the road unis. Most NBA teams have their city/state name across the front away from home, not their nickname. And with a nickname as lame-o as Thunder, cut your losses and just put OKC.

2. An interesting mascot. Something we don’t expect. I’m down with the thundering buffalo approach but not too much of it, or you’ll make me thing we should be called the Thundering Buffalo. No lightning bolts, please. Thunder isn’t lightning. I know some people confuse the two, but they aren’t the same. Thunder isn’t really a tangible thing so it makes it hard, but don’t just cop out and put a really scary looking wall cloud or anything. Gary England would freak.

3. Win. Who cares what you look like when you’re beating the basketballs off people. As long as you win your mascot could be Rosie O’Donnell in a two-piece and it wouldn’t matter.

We weren’t going to blow anyone away with our logo. We’d tried to stay classy and not cartoony. Some across the country say we failed, but it doesn’t matter. I actually think it kind of has a classic, 70’s ABA look to it in a way. Most people weren’t going to like it regardless because they don’t like how we got them. Who cares. They’re ours and they’re here to stay.