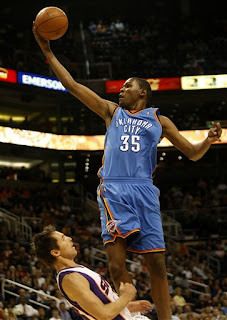 Let me just say this: I want Robert Swift to become a great player. OKC needs him to. But Lord help us if he ever becomes the face of this franchise. Nothing against the big fella, but we all know he isn’t exactly easy on the eyes. The hair, the pale skin, the tats. The awkward lumbering. But if he ever gets it he could be a major piece in the Thunder puzzle.

But the good news is Big Robert played tonight. Because without him, the Thunder (1-5) would’ve only had eight players dressed. And the nine that were in their light blue unis played hard all night, taking the Suns (5-3) to the limit in a 102-93 loss. The Thunder tipped a ton of passes and got most loose balls. Very impressed with the hustle this evening.

You add Chris Wilcox, Joe Smith, Earl Watson to the mix tonight and things might have been different. You could visibly see the team wear down late in the fourth. Phoenix started getting more of the loose balls, picking pockets and grabbing offensive rebounds. But even without them, Johan Petro played another solid game scoring 17 on 7-10 shooting. But missing Wilcox and Nick Collison not playing a lot due to foul trouble contributed to being outrebounded 38-35.

Jeff Green went down hard and appeared to have hurt his wrist. Kevin Durant limped off late in the fourth. Either these guys are all made of ceramic, they’re big babies or they’re really unlucky. Pretty much anytime someone went up for a rebound, slipped a little or was fouled, I just knew they sprained and ankle, blew out a knee or broke their face. Seriously. With the rash of injuries, I’ve got it in my head that every play someone is going to get hurt. I saw Earl Watson bend over to tie his shoe and I swear I saw his MCL snap. 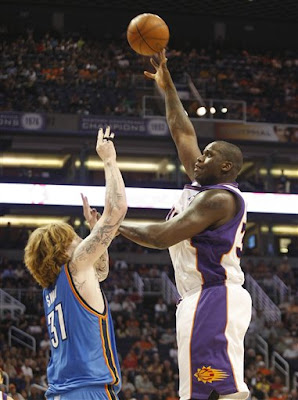 Other than the hustle and active hands, there were some other major positives. Russell Westbrook played his best game of the preseason. He led the team in scoring and knocked down some nice looking outside shots, but he played really, really good defense on Steve Nash. Every now and then I see Westbrook cross someone and dive to the bucket and I think I’m watching a perennial All-Star. In a few years, that hesitation-cross over move Westbrook has could be deadly. Dare I say it looked kind of Chris Paul-ish? Tonight Westbrook finished with 22 points on 7-13 shooting and was 6-6 from the line. He pulled down six boards and dished four assists, but did turn it seven times. But that comes with him playing the most minutes of the preseason (39) and having to handle the ball basically the entire game.

And the sequence with Green’s awesome block then Durant ooping to Westbrook was electric. That, combined with all the blocks and steals showed how athletic this team is.

Durant was ok, netting 19, but seemed reluctant at times to try and take the game over. Green was ok as well, putting up 12 and seven, but on 4-12 shooting. Damien Wilkins might as well have stayed home tonight, as he had two points in 18 minutes on 1-5 shooting.

All in all, I think this game might be a microcosm of what lies ahead for the season (other than army of players missing with injuries). The squad played hard until the finish, but didn’t have the gas or the wherewithal to finish. They couldn’t secure a major defensive rebound with about five minutes left that turned into a big Sun three. They couldn’t score with 40 seconds left down six. There were just small things they didn’t do which resulted in the loss. They turned it 23 times and were sloppy at times. But they worked hard and showed flashes of brilliance. Just keep telling yourself as it goes on – they’re young; it will come.