Thunder rolls to biggest win of the season, 114-93 over Utah 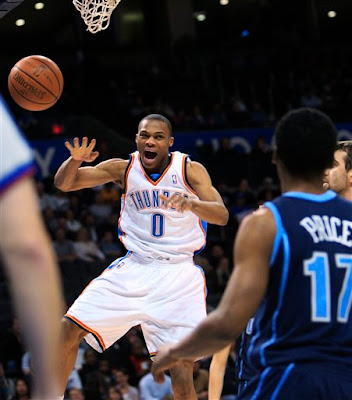 The Thunder still turned the ball over 19 times to the Jazz’s nine, but OKC (7-33) made up for it on the glass, at the free throw line and by shooting extremely well. Kevin Durant had *just* 21 points, and 10 of it came from the free throw line. On top of getting to the line 38 times, the Thunder hit 33 free shots for a clip of about 87 percent. That’s huge. KD also had nine rebounds, continuing this very good trend of scoring and rebounding. But he did turn it over six more times himself, which is still an area of concern.

Though the Jazz (23-16) scored 25 points off the 19 OKC turns, I think some turnovers are necessary for this team to be successful on the offensive end. And what I mean by that is that there are a lot of risk takers and instead of playing tight, half-court offense, the Thunder likes to run, make tight passes and score on the fly. So obviously while you want to cut down on the freebies, you don’t want to lose what’s making you a solid offensive team, if that makes sense.

There’s nice things to take out of this one. First, this is Oklahoma City’s biggest win of the year in two ways: 1) In terms of margin, 21 points is the most OKC has won by and 2) This is the first plus-.500 team the Thunder has beaten this year. Second, that makes the Thunder 4-4 in its last eight and 3) OKC outscored Utah 64-45 in the second half after leading by just two at the break. That’s the way to beat up a division rival at home.

But look at the +/- for OKC’s starters: +21, +17, +22, +20, +21. The three did their work. Russell Westbrook had 22, KD had the previously mentioned 21 and Jeff Green had 23. Chip in with Nenad Krstic playing his best game with 14 and 11 and Nick Collison continuing to play well with 13 and 11 and you’ve got a certain recipe for a win. And again, Westbrook played an excellent game, showcasing why he may actually win Rookie of the Year — on top of a solid scoring game, he dished seven assists and picked up three steals. He’s totally under control and looks like everything has slowed down for him. He runs the break and instead of driving hell-bent to the bucket, he pulls up and hits a jumper or drops a beautiful pass to Collison. He’s really getting it and it’s really making a difference.

Of course, it has to be acknowledged that this Utah team was missing Paul Milsap, Carlos Boozer and C.J. Miles, but still a win over a potential playoff team is still a big win. OKC has been getting closer and closer to this type of win and tonight, got over the hump. For whatever reason, the Jazz are awesome at home and not so awesome on the road. This win is going to do big things for the Thunder’s confidence. The Jazz may have been without some of their best players but they were still 23-15 and this is still the best win OKC has. I just wish this was the Thunder team that tipped off at the Ford Center Oct. 29. I truly think we’d be looking at a near .500 club if they had played like this to start with.

I haven’t said anything about Brian Davis in a while, but I have to point this out. During the second quarter, the camera flashed over to Desmond Mason and Kyle Weaver sitting by each other on the bench and Davis said confidently, “The Master and the Pupil.” Huh? Who’s the Master? Dez? And what exactly is he a master of? Bad shooting? That was just a weird moment among many nightly weird moments when Brian Davis is involved. If we give him 30 more years of this, he’ll probably reach “lovable, crazy-man” status like Bob Barry, where he can say anything and we all just say, “That’s Brian for you.” But he hasn’t been here 30 years so right now it’s kind of not so lovable.

One note to point out: Chucky Atkins was an official Trillionaire tonight. He played one minute and didn’t notch anything — no points, no fouls, no assists, no nothing. So his stat line looks like: 1-0-0-0-0-0-0-0-0-0. Congrats Chucky. You earned it.

Game one of the three-game stand is down and next up is the Pistons Friday night. Of course, we all remember how Allen Iverson nipped OKC with a runner beating the Thunder 90-88 a few weeks ago. It would be nice to get a little revenge against a second straight opponent, start a winning streak and get to .500 for 2009.