Not as good as ThunderClipped. I think my theory fails.

But something became very clear tonight: The Lakers are really good. The post combo of Pau Gasol and Andrew Bynum is scary especially with how terrifyingly good Bynum looked. Kobe played just eight minutes but within those ticks he knocked down two jaw-droppingly sweet treys. Like those kind of threes that every slightly overweight white guy wearing a sweaty red headband at the Rec Center tries and airballs every time. A little cross-over, shimmy-shake pull-up-in-your-face three that just makes you mumble, “He’s good.”

It was fun to watch Oklahoma City on ESPN tonight. A little ironic former Sonic play-by-play stud Kevin Calabro was on the call. You think he had an iron fist clenched under the scorers table and was forcing that on-camera smile through gritted teeth like John McCain during a presidential debate? I think so. He spent 20 years calling games for the team and then they left him like Donald Gennaro split on Lex and Tim in Jurassic Park. I’m sure he’s not bitter. Nah. (EDIT: But to be clear, Calabro didn’t want to follow them to OKC, I just mean the team left him, so he left the team, if that makes sense.)

It took Calabro an hour to mention the 41 years of history and the Sonics move to OKC. I thought Marc Jackson and Calabro handled it pretty well though. It had to be touched on in some regard, but they kept it short and sweet; said what needed to be said and moved on. They weren’t unfair to OKC at all and we’re fair to Seattle. Nicely done. Just more unnecessary evidence that Calabro is one of the finest voices in the business.

Oh yeah, the Thunder. The team played like its typically feisty self in the last preseason tuner, hanging around and scrapping all game long, but coming up short, 105-94 to the Lakers (6-2). One key stretch stood out tonight as the difference in this game. Oklahoma City (1-6) had closed the gap on LA to two late in the third with a 7-0 run to cut it to 77-75. They were hustling, making plays and hitting shots. It looked like the game was going to turn into a fourth quarter gruelfest. But then the tide turned.

Faster than you can say Vladimir Radmonivic, the Lakers put up 10 points to close the third. OKC just melted. It turned the ball over, Earl Watson took a “What are you DOING!?!” three and the game got away. Because of that stretch, the team had to try and play catch up during the fourth. 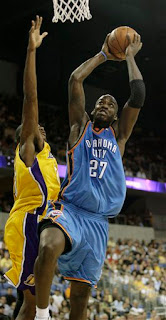 But for a second straight night, Russell Westbrook was solid. The turnovers (six tonight) are a clear issue, but remember folks – this is just his seventh professional game. He’s major league raw and learning the game on the fly. Turnovers happen with youth. But the fact that he played ball-hawking D and scored 23 in 28 minutes on 7-12 shooting was great. He attacks the bucket like Refrigerator Perry attacks an all-you-can-eat buffet. His jumpshot is coming along already and he’s beginning to get the feel for the kick-out. I think this kid will be a star. I know I’m just excited about the team as a whole right now, but every time the ball is in Westbrook’s hands I get a little more amped. He’s just fun to watch. And he grabbed six boards. I love that he gets in there with the bigs and rebounds. He just cuts out the middle-man. If he snatches the board, he doesn’t have to get an outlet pass to start his hellish fast break. He starts it on his own. I love that.

Johan Petro was ok, but it’s clear Joe Smith is going to be a major help. He plays great defense and is a reliable post man. Good to have him back in the rotation. Another thing that’s becoming more clear: Kevin Durant is going to have to be consistent for the Thunder to win. The team is going to rely a lot on him scoring 25 to stay in these games. He went for 15 tonight and looked a little passive again. He’s a superstar in waiting and is figuring out the fine line between “get my team involved and don’t hog the ball” and “take over the game and don’t let someone screw this up.” It’s surely a difficult thing for a 20-year-old to get the hang of.

Lastly, Jeff Green is not a jumpshooter. He went 2-11 from the field and just doesn’t look comfortable from 20 feet and out. The potential and skillset is there. He just needs to understand his game and get comfortable with what he does best.

Not the best game, but not anything to cry about. Now we’re done with the meaningless things and time to get revved up for opening night on Wednesday.