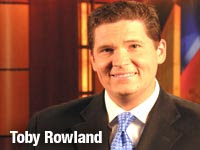 For those that aren’t aware, evidently the lamest sports talk radio station in Oklahoma, KREF, has prevented KWTV-9 reporter/anchor Toby Rowland out if his contract to become the Thunder’s new sideline reporter.

Rowland told The Oklahoman he was “crushed” and his lawyer said he may consider filing a lawsuit against “The Ref” to let him out of his contract. Talk about an awkward Monday morning meeting at The Ref.

The thing is, The Ref can’t afford to let Rowland go. It’s not like he’s some amazing talent that is drawing in thousands of listeners, but when you’re other two “star” anchors are Myron Patton and Rusty Olsen, Rowland might as well be Colin Cowherd. Nothing against Rusty as I have covered numerous events with him and he’s a genuinely nice person – just a little weird. And as for Patton, I’ve never really had much contact with him but the one image that sticks out to me was at one Bob Stoops presser, Patton was sitting on the floor Indian-style. For some reason I found that really strange.

But to hold a guy back like that is weak sauce. Really weak. The reason Rowland got into this business was to go up the ladder: To land an all-time awesome gig and what would be better than being the sideline reporter for a professional franchise in your hometown. I’m sure when he was a junior reporter he wasn’t thinking, “Boy, I want to do a morning radio show for the third best sports talk radio station in Oklahoma City on some AM dial that no one even knows exists!”

But what are you going to do. Rowland may get another shot later down the line, but hopefully the Thunder settles on a decent sideline reporter.
Seeing as that job is oh-so-important.

THUNDER ANNOUNCER BRIAN DAVIS: Let’s go down to Toby with a sideline update.
TOBY: Yeah, Kevin Durant looks really tired right now. I’m standing right here next to him and he’s like sweating and drinking Gatorade and stuff. Oh, everyone can just see that on TV? Oh. Uh… well, lots of action here! – back to you guys.

I have a major gripe about sideline reporters, but I’ll save that for another day.