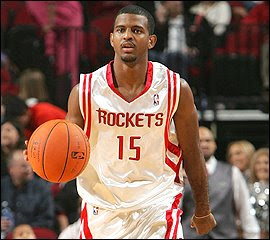 Yes, that’s the former Oklahoma State point guard. According to the Oklahoman, he’ll be in training camp. He’s been in the league (with the Houston Rockets) for a few years and it looks like he’s got a real shot at making the team. The Thunder has 14 roster spots filled (with Lucas) and the league maximum you can carry into the regular season is 15.

One key note: the Thunder reserved the right to waive Lucas before the start of the regular season. So he by no means has made the team.

This means there’s two former Pokes on the roster (Desmond Mason being the other). Is this like a strategy by team management to get fans excited? Bring in all the former state college standouts, see what they can do and make Okies get all nostalgic? I’m waiting for Nate Erdman and Ernie Abercrombie’s chance. Or what about Shay Seals? I heard Franz Steyn and Randy Rutherford were also available. Oh, what’s that? All those guys either sucked big time or don’t play basketball anymore? Ok, well just give me Jabari Brown and Maurice Baker. I could go on for days with these old school names.

But in all seriousness, when you’re other two point guards are Earl Watson and super-unproven rookie Russell Westbrook, having a good security blanket like Lucas is definitely a good idea.

Also according to the Oklahoman, the Thunder will bring in power forward rookie Derrick Byers (Vanderbilt) and Chris Alexander, 7-1 center from Iowa State.