Well, that is if you think they will actually look like that. 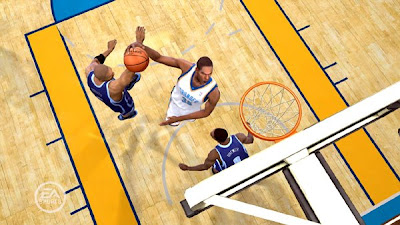 Via Oklahoma City Thunder Forum and the Oklahoman’s Thunder Rumblings, comes NBA Live 2009’s version of OKC’s home jerseys (picture) and NBA 2K9’s (video). I posted about a week ago that it was confirmed that the Thunder would be in NBA 2K9, but we weren’t sure about Live. Well, obviously Live has made the update.

One thing of interesting note from the 2K9 video – the announcer had the cut-in robot voice when he said, “The Chicago Bulls will take on…(voice inflection change, jump cut in sound) and the OKLA-homa CI-ty squad. So “Thunder” didn’t make it in for the announcers to say – or did it? About three minutes in, Kevin Harlan says, “The THUNDER will bring out some reserves.” So it’s in there. Whatever. Also, the court looks super bland. Hopefully that’s not what it will actually look like. Surely the logo will be at mid-court like that, but the lanes and baselines look so boring. They look like we snuck into the Pepsi Center and pried the Nuggets’ lane right up and trucked it into the Thunderdome.

The Thunder will actually reveal the real jerseys Monday. No telling if they will be anything like the ones on the game. Live’s jersey and 2K9’s are basically the exact same – does that mean the actual duds will look like that or did both gaming companies just come together to have a unified look? I guess we’ll know Monday. Here’s to hoping they don’t use that Microsoft Word ’97 font for “Thunder” like they have on the games. I really want to see “Oklahoma City” on one of the jerseys – I’d prefer both – because it could look good with the player’s number in the middle and “Oklahoma” and top with “City” underneath. But they never do what I want.

Sucks that Darnell Mayberry beat me to this because I’ve been stalking NBA Live ’09 and 2K9 updates to try and catch a leak. But I was at the OU game tonight so I missed it. Oh well. That’s why he makes the big bucks. That and his extremely awkward NewsOK video commentaries. And DM says on Thunder Rumblings, “[The uniforms] looks pretty sweet to me.” They could be brown burlap sacks with duct tape spelling out “Thunder” across the front with cowboy boots for shoes and Darnell Mayberry would say they “look pretty sweet.” Not saying the game’s jerseys looked bad but they definitely weren’t anything spectacular.