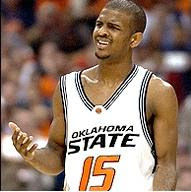 Not really a big shocker, but John Lucas, Part: III was waived Monday. Which begs the question: Why?

With one roster spot open, why waive Lucas now? Was he just insurance in case Russell Westbrook struggled mightily to open to the season and the Thunder needed someone to back up Earl Watson and since Russell is evidently totally awesome, he was cut? Or is GM Sam Presti working on something and needs that extra roster spot?

User StarksFan311 from OKCThunderFans.com made mention of cutting Lucas about two weeks ago to sign recently available guard Salim Stoudamire. It’s definitely a good thought because Stoudamire is an excellent shooter and currently, OKC is just 2-13 from downtown on the season. Two for thirteen! That’s awful. But Salim Stoudamire is not the answer there. Like I’ve said before, maybe Kyle Weaver progresses into a nice deep threat. Or maybe the Thunder deals/signs a proven three-man. Whatever the case, something needs to be done in the future to help in this area.

My gut says Lucas was just insurance and wasn’t going to see the court at all this season unless Westbrook struggled, so Presti went ahead and cut him to make room for any potential future needs.

With the loss of Lucas, OKC loses one part of its genius marketing plan to assemble a team full of former state college stars. Hopefully the Thunder signs Longar Longar as his replacement.