The Thunder cracks the win column 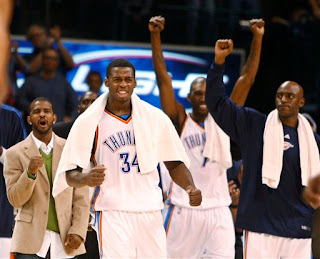 Most times, I don’t even know why I try and predict things. Sports are like Oklahoma weather – hard to know what’s going to happen because in 15 minutes, everything might change.

But regardless, a tip-of-the-hat to me for going on record saying that a strong push by Russell Westbrook would carry the Thunder (1-2) to its first ever win. Also, a wag of the finger for saying OKC would come out shooting lights out. Not hardly as the team hit its first 6 of 17 shots. But oh well as the team produced an 88-85 win in front of an awesome crowd at the Ford Center Sunday night.

It was definitely a slow start offensively, but tonight, pure grit and determination got the job done. In the first eight minutes, the Thunder racked up something like eight offensive boards. The best sequence being three straight offensive grabs in which Nick Collison capped it off by diving on the floor to preserve another possession. Sequences like that are things that are going to get this city behind this team.

But how about that win. Playing a clutch, nasty, defensive fourth quarter, holding Minnesota (1-2) to 12 points and coming up with 18 in the final frame to lock away the win. Heck, OKC held the Wolves to only two points in the final five minutes. That’s locking down.

These are the kind of games the Thunder can’t afford to lose – home games to teams on the same level – if OKC wants to have a better season than last. It took nine games to get a win last year. Only three this year. OKC Bump anyone? 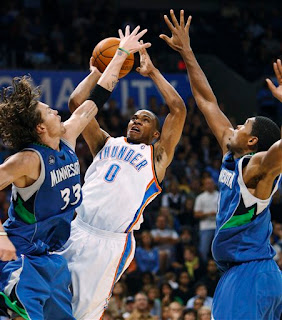 Russell Westbrook just made another strong case as to why he should be my favorite player. He sparked a 13-0 run in the third that got the Thunder back in the game. He played awesome defense and was extremely active in the passing lanes and on the ball. He hit the go-ahead shot in the fourth to put the team up 86-85 and that little floater he made in the first was just plain awesome. The guy is going to be a star. I think he is validating Sam Presti’s “risk pick” more and more by the second. I have been pretty adamant about him starting, but honestly, having him off the bench might be a good thing. He can spark runs, get tough on defense and provide a really good pick-me-up for the team once he comes on the floor. I think he should see starter minutes, but maybe having him off the bench for a while is a good thing. Or maybe I’m just excited because we won.

Two things I said we going to be key tonight: free throw shooting and rebounding. In the free throw battle, OKC took four more but made three less than the Wolves. That’s not good. But the Thunder made up for it on the glass by outrebounding Minnesota 50-38 with 19 of the offensive variety. 19! That’s big time. And not to forget, Nick Collison had seven of the offensive boards. He is that guy that every coach is talking about in their preseason speech. “I’m going to play the guy that works his butt off and hustles every second he’s on the floor.” That’s Nick. He’s the guy that is relentless and gets things done more so with effort than skill. 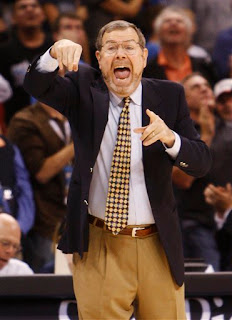 Dr. Thunder wants someone to do something

But just as many have been clamoring for, Coach Peej had Westbrook and Earl Watson on the floor together down the stretch. Which worked well. Westbrook attacked and Watson distributed. The two were very complementary to each other’s game.

To wrap up, this was a total team effort where everyone chipped in. Kevin Durant was ok, scoring 18 on 7-21 shooting. Jeff Green was better than ok scoring 13. Chris Wilcox was good off the bench, netting 12 with seven boards. Westbrook as mentioned was excellent, Collison great and Desmond Mason was solid off the bench. Just an all-around good game for the Thunder.

The Thunder gets two days off before taking on the defending champion Boston Celtics Wednesday at the Ford Center.