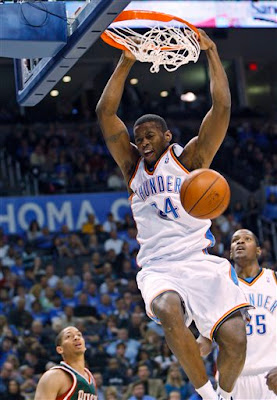 Tonight wasn’t about the scoreboard. Though it did read 98-87 with a Thunder loss and it sure would have been nice to start out 1-0, it really didn’t matter that much.

This night was about Oklahoma City. And during Mayor Mick’s speech, I won’t lie, I had tears welling in my eyes. I know that sounds crazy, but as someone that’s spent all 23 years of his life in this wonderful state and someone that is Oklahoman to the bone, October 29, 2008 meant a whole heck of a lot to me. When Commissioner Stern grabbed the mic and said, “Oklahoma City… welcome to the National Basketball Association,” I nearly lost it. The crowd hung on every word from the Commish and Mayor Mick and the Mayor even pulled Clay Bennett out of the shadows to which the crowd gave the Boss a full minute standing ovation. Just magical.

As for the game, not so magical. I hate to nit-pick and snipe at things about the presentation, but it’s unavoidable. But we all need to keep in mind, this thing has been thrown together in a matter of months and this was the first go-round. Give it a year and I’m sure the in-game festivities will be cleaned up and much better. The emcee will be better with more practice. The transition from one thing to the next will be better. Heck, hopefully the team will be better. 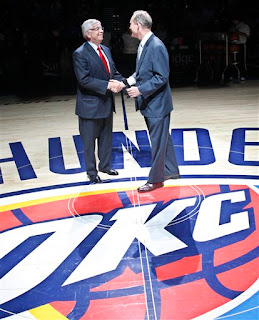 A couple notes about the game presentation:
I never thought I’d say it because I’ve never really noticed it until now – the Thunder needs a mascot. One is coming and is supposed to be introduced before the end of the season, but the lack of a mascot is a gaping whole in the presentation. It’s kind of like the Seattle SuperSonics – you never really notice them until they’re gone. Ok, that was uncalled for. But not having a Hugo run around and de-pants (or pants, depending on where you stand on that issue) referees, throw t-shirts, dive through fire, break dance or do whatever really brought down the entertainment value. I’m a college guy through and through and mascots are always an afterthought because they have little to do with the game in college (it’s all about the bands, the cheerleaders, the chants, the tradition). But in the pros, mascots are pretty key.

Even without a mascot, there was certain entertainment value missing. No t-shirt cannons. No unique fan contests or clever skits. They never played a single video on the jumbo screens. Though I loathe the movie, no Anchorman clip. No Noise-O-Meter. No cool graphic. The extent of what was on the video board was “Make! Some! Noise!” with a dark cloud behind it. Bor–ing. They didn’t even pass out those long balloon things to distract the other team at the free throw line. Come on!

To be honest, it felt kind of like an OU basketball game without the band. A Midfirst bank giveaway, a “best/funny dancer” thing, a t-shirt toss and a couple performances by the “dancers.” There was just an element lacking. Not having the t-shirt sling shot sucks for us proud patrons of Loud City because the Thunder Girls aren’t exactly gifted with Brett Favre type arms.

I was slightly disappointed with the court. I loved the baselines, but the choice of color combos is just off. Mainly because the fact that the team has four colors. Putting the blue and yellow together in the lane was weird because the yellow is barely noticeable on the logo or the jerseys. I was under the impression that they were featuring the blue and orange-red? Guess not. They really need to cut one of those colors. I do like the simplicity of it though. I like the design and the look of it overall. Just not so sure about the color combination.

The crowd was unbelievable though. For the first quarter I think everyone had kind of a “So what are we supposed to do again?” feel because it was so surreal to be back in this situation. And it also tough to get loud because the team was down double digits before you could say Thunderstruck. But I’ve never seen a crowd ready to explode like the one tonight. Down 20 in the fourth, after a quick little 6-0 spurt that was lit with a monster Dez Mason jam, the Thunderdome faithful erupted. Then Russell Westbrook hit a three to cut it to 11 with five minutes left and you’d have thought he hit a go ahead three in game seven of the Finals. It was awesome. I hope we’re in for a full season of that.

But I’ll admit, I’m a little fearful of what it will be like in February if the team is 6-29 and just plain stinks. Will people still want to go? I won’t lie: During a stretch in the third quarter when the Thunder fell behind by 24 again and couldn’t get a defensive rebound and when they did, they promptly threw the ball out of bounds like it was on fire, I was thinking, “I don’t know about this…” But then the little run in the fourth brought me back. But that kind of said to me: This team can get by for a while sucking; but they’re going to need to get good at some point.

As for some expert breaking down of the game – it was rough. The lack of a low post scorer/defender was showcased by super stiff Andrew Bogut scoring the first six Buck points. The Thunder couldn’t get clean rebounds and couldn’t start any fast breaks. Kevin Durant not scoring until the third quarter hurt and only having 12 for the night really hurt. OKC has to have him lighting up the board. Has to. Russell Westbrook makes me feel better and better by the second. He plays so hard and is so athletic that I see great things for him. Heck, he led the team in offensive rebounds with four. I’m starting to become a little anti-Earl because 1) I love Westbrook and 2) Earl just screams “solid back-up point guard.” Coach Peej might need to consider different alternatives to getting Westbrook time rather than just swamping him and the Earl. Peej seems a little set in his rotation, but maybe playing the Earl and Westbrook together could liven up the offense. I don’t know… just thinking out loud.

We got out-rebounded by eight and the Bucks hit six more threes than we did. Turnovers were even but the Thunder shot much more poorly at the free throw line. All a recipe for a loss. 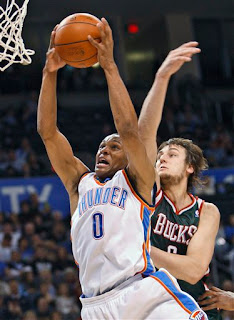 I officially have my first ThunderCrush

To wrap up – we all need to keep in mind that this is a major work in progress and we don’t turn into the Boston Celtics overnight. We don’t flip on a switch and have all the bells and whistles of a Dallas Mavericks game. It’s a process and we all are growing into this. I’m learning how to be an NBA fan. It’s just weird for me to get all super-pumped and paint my face with Thunder blue, dark blue, yellow and orange-red because this is all so new. We’re all learning. The team will get better and the games will get better. Give it time. We’ve got the crowd thing down though – we’re awesome at that. The Thunder goes to Houston on Nov. 1 and then returns home this Sunday. See you at the Dome.

BOX SCORE
View from the other side