League dates, crazy trades, and more Thunder news and notes are in the Friday Bolts, from @crayallred

Preview week, day one: A ridiculously meticulous, incoherent way to break down the team 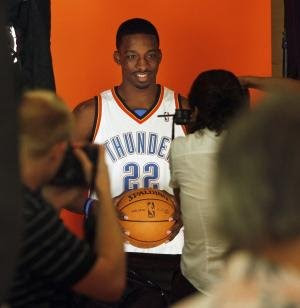 First off, let’s get something straight – I’m not John Hollinger. I wish I was. I dream about being able to crunch numbers and invent amazing, insightful stats like him. But I’m not. But I tried to come up with something to help me rank the value of each player on the team – what I’m calling Thunder Importance Rating. It’s basically Hollinger’s Player Efficiency Rating (PER) but with a sick twist.

To make it short, PER is a player’s per minute production. But what I’m trying to account for is how valuable that player was to the team’s success.

Here’s how I calculated each player’s TIR: I tried to devise a formula that accounted for how important a player was in each of their respective team’s wins last year. Obviously, when a team wins, its best players typically play better and that’s why they win. I was going to add in what percentage of the team’s rebounds, points and assists each player had on the season, but my brain was about to expode from all the number crunching I’d already done. Maybe next time.

So for instance, in wins last year, Kevin Durant played two more minutes per game, shot seven percent better from the field, averaged 1.4 more rebounds, .05 more assists and 4.6 more points per game. So adding all that together, Durant put together a score of 9.2. Since that doesn’t totally account for the player’s actual statistics, I then added Hollinger’s PER number to it giving Durant an overall TIR of 25.02 which ranks the highest on the team, making him the most important player.

Now I know this formula may be bunk and it may be stupid, but I was looking for a way to figure out how much each player meant in each win. It also doesn’t include defensive statistics/perception, which is really unfair for some players like Desmond Mason who play solid defense. I didn’t include players like Bob Swift and Mohamed Sene because they really didn’t play last year unless in mop up time. And other rooks that may not even make it like DeVon Hardin weren’t included either.Now for players that are expected to improve greatly, then there’s a bit of a curve. For instance, Jeff Green scored relatively low in both the winning formula and PER. But Green was just a rookie and is supposed to be much improved this year.

And there’s four rookies that look to contribute. So there’s no stats, no winning formula and no TIR for them. It’s just a judgement call there.One surprising player that elevated his game in wins was guard Damien Wilkins. He played four and a half more minutes, shot 10 percent higher from the field, had 1.1 more rebounds and averaged 3.8 more points per game.

Again, rip it up if you want to, but it was only for fun and an attempt to decipher who means the most to the Thunder. Obviously, KD is by far the foundation, but who else needs to step up and play better to add on some wins? I think it’s safe to say in order for the Thunder to increase on its 20 wins last year, Green needs to improve greatly. You know what you’re going to get out of Mason – a solid 36 minutes or so with 10 points and six boards.

Understanding the important parts of each player’s game to help the team win is vital. Absolutely vital. So it’s safe to say the Thunder’s success hinged a lot more on Durant’s play than Cleveland’s did with James. And that’s not a good thing. A supporting cast is huge in the NBA, so if OKC is going to be successful, someone will have to elevate his game. Again, I’m talking to you Jeff Green.

League dates, crazy trades, and more Thunder news and notes are in the Friday Bolts, from @crayallred

Adam Silver appeared on CNN, saying that the league probably won’t start the next season before 2021