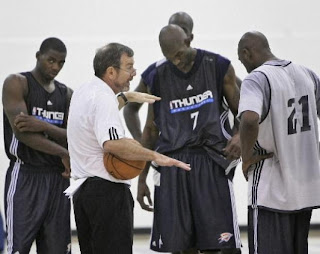 What are the five can’t-miss games of the season?
Simple – Opening Night against the Bucks (Oct. 29), New Orleans return to OKC (Nov.21), Cleveland (Dec. 21), Portland (Feb. 6) and the Lakers (Feb. 24). Why these games? Well Opening Night for obvious reasons – it’s going to be an all-out celebration. New Orleans for obvious reasons too – everyone should be there to give Chris Paul and the Hornets a standing ovation when they are announced over the PA at the Ford Center. Cleveland because of the King. Portland because they are the Thunder’s interim rival and also to finally see No. 1 and No. 2 square off as Greg Oden and Kevin Durant finally go head-to-head. And the Lakers because of Kobe Bryant – especially to see if defensive whiz Russell Westbrook gets the chance to guard him and to see if he can.

How many times a game will we hear “Thunderstruck?”
I’m guessing seven to start off. One during player introductions. Two during some random timeout in the first quarter. Three, when they run back out after halftime. Four, five and six at some point mid-game they’ll play the guitar lick and the “Thunder” chanting part when we need a defensive stand and seven, after the game. Look, we got it at the logo unveiling and at the jersey unveiling. All signs point to the team being named after the song. If I were naming a team after my favorite tune, we’d be the Oklahoma City Ants because I dearly love Dave Matthews Band’s Ants Marching. They shouldn’t play it that many times, but I’m sure they will. Like I’ve written before, Never Been to Spain needs to replace at least one of those Thunderstrucks, but no one ever does what I want.

Will the Thunder improve on its win total from last year?
Yes. Absolutely. Mainly because it doesn’t take a lot to improve on 20 wins. But this team is better. I don’t care what John Hollinger or anyone says. Kevin Durant is better and Jeff Green *should be* better. They’ve added pieces like Westbrook and Desmond Mason. And there’s the unreal excitement in their hometown. Last season was total uncertainty for the team and this year they’ll be in a city that deeply loves everything about them, will pack the stands and will scream their hearts out for two hours every night for them. I think that should help produce a few wins.

What are the main missing pieces?
I’m not going to be one of those sarcastic jerks that does the whole, “Geez, where to begin?” things, but seriously, where to begin? The Thunder needs helps in a lot of areas, most notably outside shooting. Thunderguru Joe suggested trading for the Magic’s J.J. Redick, but I’m thinking a more proven three-point threat is what they need. Jason Kapono, Luther Head, Brent Barry, Kyle Korver. But that’s not what they’ll be able to get. While obviously not all or really none of those guys are available, right now OKC will have to hope and pray someone becomes a threat (Kyle Weaver? Nah.) But you know, Kapono, Head and Korver had to start somewhere, right? The Magic are openly discussing dealing Redick, so maybe that’s the gamble Sam Presti ought to make. Give up very little (another expiring contract!) and hope he turns out to be good. I don’t think you can really go too wrong there. Earl Watson and Damien Wilkins aren’t terrible from long distance, they’re just not consistent. A second solid scorer would be the second main missing piece, but let’s not try to build Rome in a day here.

If I am going to buy a jersey, whose should I get?
I’ve told friends I’m getting a custom Thunder Gary Payton #20 jersey or a Rain Man, Shawn Kemp #40 uni, but the price is pretty hefty. Maybe I could get a discount if I just got a Detlef Schrempf #11. Just one thing to make sure of: Do not, I repeat, DO NOT get a custom jersey with your name on the back. There is nothing worse than some fat guy sitting in Loud City with a No. 35 jersey with “Stravinski” strapped across the back of it. News flash: You don’t play for the team. Kevin Durant does – so wear his jersey. Or get a throwback like me and support our rich history (zing).

2 weeks ago
Other 555
Go to mobile version