The Thunder will be mascot-less

At least for a few months, according to The Oklahoman.

“There will not be a mascot at the start of the season,” said team spokesman Dan Mahoney. “It might not be ready until the second half of the season, maybe even after the All-Star break (in February). We’re going to take some time to develop it. We want to make sure it’s the right mascot and the design is right. We’re putting a lot of time and thought into it. You don’t get a second chance to do this. You can’t buy an NBA mascot costume off the rack.”

Oh Lord. I can hear the jokes and one-liners coming in waves after that quote. With the entire sports world hating the logo, most of it hating the name and about half hating the jerseys, I can only imagine the zingers that are to come from that. I think we can only handle a few unveilings at a time anyway. I don’t think the state of Oklahoma can handle another public perception disaster anyway. If they had to rush into a mascot like they did with the name, the logo and the jerseys who knows what w 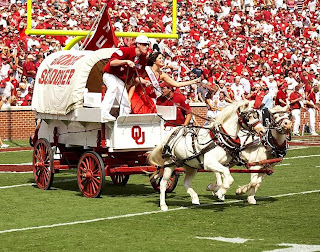 A fat guy with “Thunder” written across his chest with two cardboard lightning bolts in each hand? A really offensive Indian that runs around with its bare butt exposed swinging a bloody tomahawk?

I say just let the Sooner Schooner double as the mascot. It’s already one of the most loved, recognizable ones anyway. I’m sure David Boren wouldn’t mind – especially if the Thunder would let some of Boren’s prized National Merit scholars drive it.

Thunder draft: 3 players worth looking at with the No. 6 pick

2 months ago
Other 559
Go to mobile version