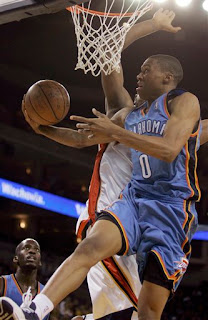 This is our installment in Jeff Clark’s (CelticsBlog.com) amazing series of NBA blogger previews.

1. What significant moves were made during the offseason?

Other than drafting Russell Westbrook at No. 4, the signing of Joe Smith is a pretty big deal. Smith has almost always played on a contender and should be the “P.J. Brown” to this team’s young players. Desmond Mason was picked up in a three-way deal and he should be a nice safety cushion in case Jeff Green falls on his face this year and doesn’t appear to be working out.

2. What are the team’s biggest strengths?

Youth and exuberance. I highly doubt any team will play harder night in and night out than the Thunder this season. This team is thirsty for wins. They want it. But right now they’re too young and too raw to get it done. But with the foundation GM Sam Presti has built, it will come. Defensively, they stunk last year (allowed 106 ppg) but should improve because of hustle and effort and also because there’s some real length and athleticism there. And that’s been one of coach P.J. Carlesimo’s main focuses this preseason.

3. What are the team’s biggest weaknesses?

Kind of like explosions in a Michael Bay flick, this is getting a little redundant. The answer: no consistent outside shooter and no consistent low-post scorer. Johan Petro has played decent in the preseason and everyone is waiting for Robert Swift’s upside to become a reality (or for him to be healthy), but for now, the Thunder stinks in the post. And Damien Wilkins is not the answer from the outside.

4. What are the goals for this team?

To go .500 at home. Most people are picking them to finish last in not only the West, but the entire NBA. Most experts don’t think they’ll improve on their 20 wins from last year. But by playing good .500 ball at the Ford Center this year, they’ll be assured of 20 wins right there and then if they play decently on the road, they could be looking at a 30 win year, which would be a huge, huge boost. Look, no one gave the 2005 Hornets a prayer to compete. They won 18 games the year before and appeared to have gotten worse. But behind a bump from a rabid city and a really, really good point guard, the team challenged for a playoff spot. There’s no reason the Thunder can’t aspire to do the same. (Key word: aspire. Look it up.)

5. Will the current roster resemble the roster at season’s end?

You know Sam Presti probably worked his magic again by acquiring Joe Smith. Smith will be a great bargaining tool at the trade deadline and OKC will probably pull a few draft picks from a contending team that needs a warm body in the post. (Atlanta I’m talking to you and we’ll take that unconditional 2010 pick, thank you.) But Smith will serve his purpose here. He helps the Thunder not be totally incompetent in the post and should guide along Johan Petro and Bob Swift. Heck, he could probably show Chris Wilcox and Nick Collison a thing or two. Come 2010, this team should be a serious contender. Presti can either hand pick all the top talent from college or use the bevy of picks as trade leverage and land a couple veteran pieces. There’s going to be so much cap room to work with it’s not even funny and some pretty good free agents are hitting the market soon. And it’s not like there aren’t good pieces in place already. Kevin Durant will be a top five scorer for the rest of his career and once Jeff Green “gets it” he could turn it on and be very Scottie Pippin-ish (not that Durant is MJ, let’s be clear there). Russell Westbrook should be able to lock down any guard and by all appearances, may turn into a dang nice player. And Serge Ibaka. Good heavens, Sergeant Slam (yeah, that’s my nickname for him, get it?) He’s more raw than sushi, but boy, he is a talent. He has dunking machine written all over him.